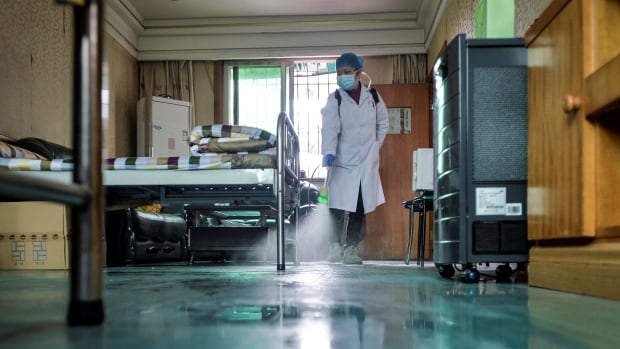 The coronavirus has taken a growing toll on Chinese health workers on the front line of the fight to stop the outbreak, a top official said Friday.

Overall, China’s National Health Commission said it had recorded 121 new deaths and 5,090 new coronavirus cases on the mainland on Thursday, taking the total number of infected to 63,851.

Some 55,748 people are being treated, while 1,380 people have died of the virus that emerged in December in Wuhan, the capital of the central province of Hubei.

The latest toll of the virus, which causes an illness called COVID-19, takes account of some deaths that had been double-counted in Hubei, the commission said.

Zeng Yixin, the Chinese health commission vice minister, said 1,716 health workers had been infected and six had died as of Tuesday, with the number of infected staff rising.

“The duties of medical workers at the front are indeed extremely heavy; their working and resting circumstances are limited, the psychological pressures are great and the risk of infection is high,” Zeng told a news conference.

China recently changed the way it is reporting data from the hard-hit Hubei province to include positive cases diagnosed by CT scan. The World Health Organization (WHO), which provides its own daily tally of cases, as of Thursday included only cases that had been confirmed with a lab test.

Tedros Adhanom Ghebreyesus, WHO’s director general, said at a briefing Friday that the Geneva-based health agency is seeking further clarity from China on how health workers in Hubei are arriving at the clinical diagnosis to ensure other respiratory diseases like the flu aren’t being mixed into COVID-19 data. He said a team of experts is on its way.

“We expect the full team to touch down over the weekend,” he said.

“Particular attention will be paid to understanding transmission of the virus, the severity of disease and the impact of ongoing response measures.”

An advance team, led by Canadian Dr. Bruce Aylward, is already on the ground.

WATCH: WHO officials talk about diagnosis of health-care workers.

The WHO says the percentage of health-care workers infected by the coronavirus is lower than other recent outbreaks. 3:07

Mike Ryan, executive director of WHO’s emergencies program, said news that more than 1,700 health-care workers have been infected was “very sad news” but not unheard of in previous coronavirus outbreaks.

Ryan said WHO officials will work with China to better understand how health-care workers are getting infected, so that those on the front lines can be better protected.

Chinese officials and hospitals have repeatedly spoken of a shortage of protective equipment, including face masks. WHO officials reiterated Friday that they have been in touch with producers to urge increased production.

The new figures for total infections gave no sign the outbreak was nearing a peak, said Adam Kamradt-Scott, an infectious diseases expert at the Centre for International Security Studies at the University of Sydney.

“While the Chinese authorities are doing their best to prevent the spread of the coronavirus, the fairly drastic measures they have implemented to date would appear to have been too little, too late,” he said.

While the vast majority of infections and deaths have been in China, in particular Hubei, there have been nearly 450 cases in some 24 countries and territories outside mainland China, and three deaths.

Egypt confirmed on Friday its first coronavirus case and said the affected person was a foreigner who had been put into isolation at hospital. The health ministry said it had informed WHO immediately and had taken all necessary preventative measures.

Japan confirmed its first coronavirus death on Thursday — a woman in her 80s living in Kanagawa, near Tokyo. One person has died in Hong Kong and one in the Philippines.

The biggest cluster of infections outside China has been on a cruise liner quarantined in a Japanese port, with 218 people on board confirmed as infected and taken off to hospital.

On Friday, some of the ship’s passengers were allowed to disembark — with priority for older passengers confined to windowless cabins — and complete their quarantine on shore.

François-Philippe Champagne, Canada’s foreign affairs minister, said 12 Canadians who were on the Diamond Princess have been infected with the coronavirus that causes COVID-19. Those passengers are all being monitored at Japanese health facilities, he said.

Hans and Lolita Wiesner are among the Canadians on the Diamond Princess.

The pair, from Joffre, Alta., met on Valentine’s Day 48 years ago.

“This is definitely the strangest one we’ve ever had,” Hans said of their anniversary, which is being spent under quarantine.

The Wiesners have been monitoring their temperature and are in good health, Hans said, adding that a positive attitude has helped them as they pass time in tight quarters.

Albertans Lolita and Hans Wiesner are celebrating a very special anniversary – on board the Diamond Princess. 5:53

Speaking from Europe on Friday, Champagne said consular officials have been deployed to Yokohama, as have three staff members from Canada’s health agency and two medical personnel from the Canadian Forces.

There was good news for passengers on another cruise ship that was finally allowed to dock in Cambodia after being rejected by five countries over fears of the virus, even though no cases were reported on board.

The MS Westerdam, carrying 1,455 passengers and 802 crew, docked in Sihanoukville port late on Thursday. It had anchored offshore earlier to allow Cambodian officials to board and collect samples from passengers with any signs of illness.

Prime Minister Hun Sen greeted the passengers with handshakes and bouquets as they stepped off the ship and boarded a bus.

“My wife and I gave him some chocolates as a show of our appreciation,” Lou Poandel, a tourist from New Jersey, told Reuters after meeting the Cambodian leader.

Separately, Royal Caribbean Cruises said it had cancelled 18 cruises in southeast Asia and joined larger rival Carnival Corp. in warning that its full-year earnings would be hit by the coronavirus outbreak.

In Singapore, which reported its biggest jump in cases to date on Thursday — up eight to 58 —  authorities were scrambling to find “patient zero,” the person who carried the disease into a company meeting last month, setting off a chain of infections linked to five other countries.

In Canada, hundreds of people are still living under quarantine at CFB Trenton after returning from the Wuhan area on chartered flights.

Wayne Duplessis had planned to wait out the outbreak in Wuhan, but changed his mind when he saw how difficult it had become to get even basic supplies. He and his family are now among the people spending 14 days in quarantine at the Ontario military base. Duplessis, who works as a teacher in China, told CBC News Network he has a little more than a week left in quarantine.

“It’s not a pleasant experience, but they’re making it really pleasant with their professionalism and their attitude,” he said of the team at the base.

Dr. Michael Gardam, who was on the front lines during the SARS crisis, answers pressing questions about the coronavirus outbreak.  8:47

Economists are scaling back growth expectations for the world’s second-largest economy as they assess the impact of the outbreak.

China will grow at its slowest rate since the global financial crisis this quarter, according to a Reuters poll of economists who said the downturn would be short-lived if the outbreak was contained.

The UN’s International Civil Aviation Organization forecast that global airline revenue could fall by $4 billion US to $5 billion US in the first quarter due to cancellations linked to the outbreak.